Let's work together Get in touchread our reviews
Home > Case Studies 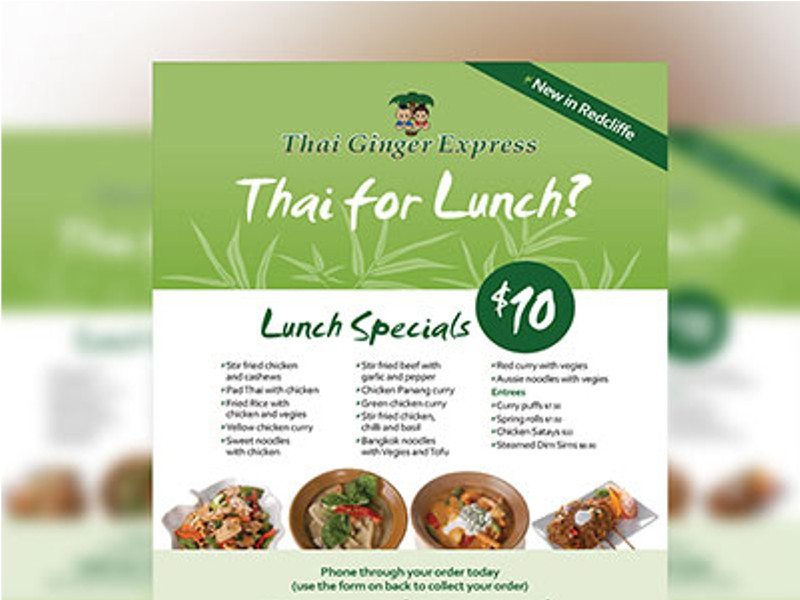 Thai Ginger & Thai Ginger Express is an authentic family run Thai restaurant business based in the northern suburbs of Brisbane.

Thai Ginger originally engaged Garnish Marketing a number of years ago to develop the branding and signage for their new Thai Ginger Express Take Away outlet in North Lakes. Part of this project was to design some flyers advertising their $10 lunch menu specials. The results of the flyers were great, in fact so happy with the design and artwork, owner of Thai Ginger, Michael Tanner, did not want to simply put flyers in letterboxes to not be read or thrown away. Michael wanted people talking about the great dishes available at Thai Ginger, promoting the $10 lunch specials and encouraging potential customers to give them a try.

I have received some really great business from this, and once customers try Thai Ginger they remain loyal for years to come!

With the above in mind Garnish Marketing embarked on a campaign on foot to personally deliver Thai Ginger lunch flyers to every business in the Kallangur area of Brisbane. But not to simply “deliver” the flyers! This campaign involved going in to each business, introducing the restaurant, talking about the food, the delivery options, the price etc… really engaging with people and quite literally getting people talking.Working within a very large and very specialist industry, Water Dynamics needed a marketing company that were going to take on board the world of irrigation and run with it. David Bell at Water Dynamics explained that, “Getting to understand our business and gain solid knowledge of what we do takes time, however Garnish Marketing rose to the challenge and after lots of discussion and thorough research we feel they have gained this knowledge. That in itself is something to be invested in”.

The outcome of this campaign was so successful that Thai Ginger still has a huge customer base in the Kallangur area who regularly orders from the lunch menu for delivery from North Lakes.  This process was then repeated when Thai Ginger launched their Redcliffe store two years later. Michael told us, “I have received some really great business from this”.  And once customers try Thai Ginger they remain loyal for years to come!

Vicky from Garnish who was the woman on the ground for this particular campaign in both Kallangur and Redcliffe said, “It was amazing how many people were prepared to stop and listen to what I had to say.  People engaged, many people also commented that had they not been handed the flyers and spoken to about them, they would probably have just got lost amongst the pile of paperwork on the desk!”

Do you need some Mentoring help?

Looking for someone to help you make your way through this crazy maze of business amidst this global crisis? I can help - just ask me how. 0422 623 781

Yep! I need some guidance please.

We help Manufacturing, Distribution & Engineering companies from all over Australia.